The museum is located in a privileged environment, near the Palaeolithic sites of Beauregard in Nemours, Pincevent near Montereau-Fault-Yonne and all major sites discovered by the archaeological monitoring of the Bassée gravel pits. It is located on the edge of the Nemours-Poligny forest which is itself a southern extension of the forest of Fontainebleau, famous for its blockfields. The building is in the heart of a magnificent wooded park of five hectares scattered with sandstone rocks, dominated by pines, oaks and black locust trees.

Completed in 1980, the rough concrete and glass construction is the work of architect and urban planner Roland Simounet. The rough concrete texture, the park’s sandstone blocks, the large glazed facades and the patios that are reminiscent of the flora of the major chronological periods, create a permanent dialogue between nature and the architecture. This museum is considered to be the architect’s most accomplished work. The building is a listed historic monument since October 2002 and also has the "20th century heritage" label; it is the only building in Seine-et-Marne to have been awarded this status by the French Ministry of Culture and Communication. 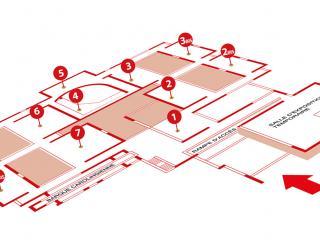 The visit of the museum is chronological. The access ramp to the collections evokes the evolution of Man, from Australopithecus to Homo sapiens. The rooms, which are spread around patios illustrating the flora of the different Prehistoric periods, are wide open to the outside through large windows. Large ground castings of the Pincevent and Etiolles prehistoric sites show the excavation work and the archaeological remains as they appear when archaeologists unearth them. The visit ends with the presentation of a large Carolingian era dugout canoe found in an ancient channel of the Seine at Noyen-sur-Seine (Seine-et-Marne).

Visitors have a choice of two tours :

The archaeological collections kept by the museum include more than 2 million objects of various origins and types, mainly from the Île-de-France region and its neighbouring areas. Approximately 3,400 objects are exhibited in the permanent collections; the others are stored in the reserves, where they are kept and studied.

Apart from the Carolingian dugout canoe, they cover the period from the earliest prehistory (the ancient Palaeolithic) to the end of the Gallic era (the Iron Age).

A museum open to modern creation

A living cultural space animated by exhibitions and events covering prehistory and archaeology, the Ile-de-France museum of prehistory also testifies to the cultural policy of the Seine-et-Marne regional authorities. In harmony with the actions in five regional museums under its authority, but also in other cultural spaces, it is a place for dialogue open to modern creation.

The decision was made to create links between the site, the collections and modern creation in all its forms (visual arts, photography, literature, performing arts, etc.).

After having hosted a work by Lili Cron, composed of 5 sculptures (1988), and an installation by Christian Lefèvre entitled Le Nichoir (1990), the museum has resolutely opened itself to modern art since 2009 by regularly giving free rein to visual artists: the artists are invited to use the location to create works in situ and in relation with the museum, some of which will remain permanently at the museum.

In 2009, it hosted painter and sculptor Jean-Paul Marcheschi for a monographic exhibition. Four of his works remain in the museum, in the woods (Horus and Acrobat) and in the heart of the collections (Le Nocher and Le Plongeur). Then, in 2011, the museum hosted a Rip Hopkins photography exhibition showing a large series of new photographs focusing on the people who work in or visit the museum.

Furthermore, throughout the year, the museum participates in major national events (Heritage Days, Museum nights ...) and offers a dense and varied cultural program for all audiences: exhibitions, events, conferences...